I took my first blacksmithing class over 6 years ago.  Ever since I took that class, I have really wanted to continue down that path of learning. Living in a suburban area with crazy noise restrictions and having a limited amount of space in my garage (largely taken up by my woodworking shop) I felt my options were really limited for a long time.

IForgeIron is a great forum for blacksmithing in general. The concept of a JABOD (just a box of dirt) forge struck me as quite appealing. It was low cost, could weather the elements and was cheap to run. It could also easily get up to forge welding temps. After a bit of research, I decided that it was totally doable! 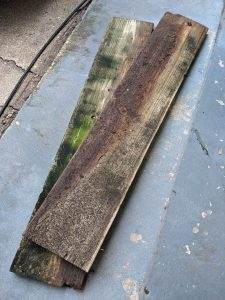 I started out with some old pressure treated 2 x 12 lumber. This was actually half of a sand box that I built for my kiddos around 25 years ago. I figured it was free and I liked how much of a rustic appearance it would yield. I prepped the lumber by sweeping the dirt off, and cutting to length. Since I plan on using butt joints and want a square box, two of the pieces would need to be shorter by 2x the board thickness. I cut two pieces at 24″ long and two at 21″ long. I just used my circular saw and a speed square as a fence to make sure they were 90 degrees. I also ripped about 1/4″ off of each edge on the table saw just to deal with some of the mushy/partially rotted edges. 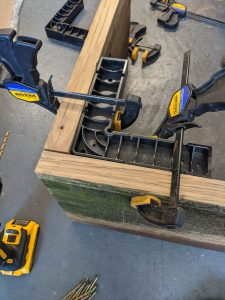 Next up I used my Rockler corner clamping jigs along with some quick clamps to make sure that everything was nice and square. I then pre-drilled three holes and attached the boards to each other using 3 1/2″ construction screws. I repeated the process until I had a box. For the bottom, I used my trim router and a straight bit to carve out a rabbet for the bottom. I used a scrap of 3/4″ plywood for the bottom and attached it with the same construction screws. 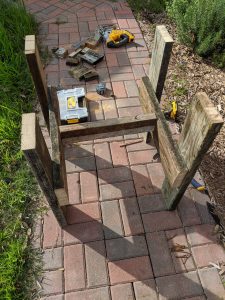 To stay in keeping with using old materials that I had on hand already, and that rustic feel, I used some old 2 x 6 lumber from a deck that I tore out years ago. It was older than the sandbox. I used very simple overlap and butt joints with screws here as well. I then just sat the box on top of the stand and affixed using more 3 1/2″ construction screws. 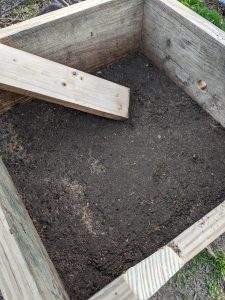 A charcoal forge doesn’t need a large air supply pipe. What the forums recommend is schedule 40 3/4″ black pipe. This has an outside diameter of 1.050″. This meant I would want to drill a hole to pass through the center of one side with a 1 1/8″ bit. As for what height… the forums recommend that you have a base of material at least 3″ thick to act as insulation to protect the bottom. Then you should have 1-2″ of space from the bottom of your air inlet pipe and the floor of the forge to allow ash to settle out. Since I am using charcoal instead of coal, clinker isn’t a problem. So, I decided to put my hole at 5″ from the bottom of the box. I then filled the box with soil from my back yard which is largely a 50/50 sand and clay mixture. I used a 2×4 to hard pack this layer in. 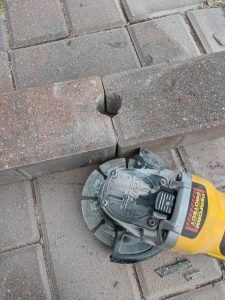 You may detect a theme here, but I decided to use some pave stones I already had on hand rather than buying fire brick. I know these will probably burn up in time, but I’m not that concerned about it. Besides, they will be covered in a thick layer of adobe. I used a diamond wheel in my angle grinder to cut out two semi-circles on the edges of two adjacent pavers. This is where the air pipe will rest next to the forge trench. The height of the hole was determined by lining the pavers up with the hole I cut in the side walls and marking with a pencil. 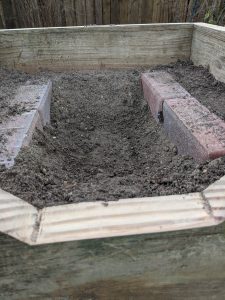 I cut openings in the sides perpendicular to where the air pipe will come in. I made mine 4″ deep from the top and 6″ wide at the bottom. I angled up from these bottom marks at a 45-degree angle and cut them out with a jigsaw. I ended up cutting out both sides even though it isn’t shown here. The pavers were placed in the box in-line with the forge openings and perpendicular to the air pipe. I made sure that both rows were parallel with each other and spaced about 9 inches apart. Ultimately we want a trench that is about 5-6″ wide, so we need to allow for the adobe that we will line the trench with later. I then back-filled behind the pavers and up to the openings I cut in the side(s). 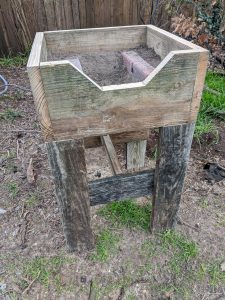 As you can see, the forge looks like it is about 50 years old and just kind of blends in to the surroundings. I love it! 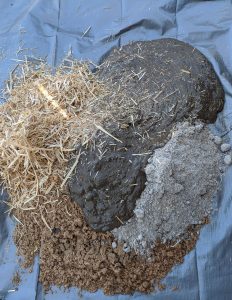 Time to get messy! I bought the smallest heavy duty tarp I could find which was 5′ x 6′. I used a mixture of 2 parts playground sand, 1 part clay (that I wet too much, but I wanted to get all of the rocks out of it that I could), 1/2 part wood ash from my BBQ smoker, 1/2 part straw. Its funny how it almost looks like a bowl of spices for a culinary dish! 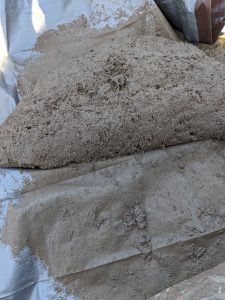 I did some of the  initial mixing with my hands, but then changed over to mixing by just picking up opposite ends of the tarp and rolling the material to the other side. I would then pick that side up and roll the material to the other end. After repeating this for a good 5 minutes, I had a nice and consistent adobe mixture. The adobe should not be sticky like mine. If it is, either add more ingredients or let it dry out for a few hours and remix. Material that is too wet will be prone to cracking as it dries. 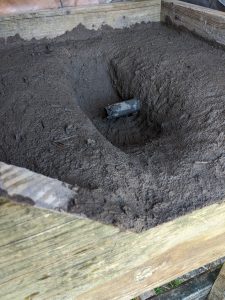 Here you can see that I gave all of the inside surfaces a good 1-2″ coating of the adobe mixture. Because mine was so wet and we were expecting rain, I covered mine with dry sand and the tarp and let it set for a few days. I then used the 2″ x 4″ to again tamp the surface. I repeated this every couple of days for a week and ended up not having any cracks. This is not the final position of the air pipe. I had it in this far to make sure that the opening didn’t collapse and to move the weight inside the forge a bit. I used a 24″ section of pipe which was rather heavy until everything dried. To the pipe I attached a steel 3/4″ x 1 1/2″ union and a rubber Fernco 2 x 2 1/2 union to that. I did perform a test firing using a hair dryer I had on hand, but even on low it was blowing WAY too hard. I had sparks flying everywhere and was burning steel. Time for another approach. 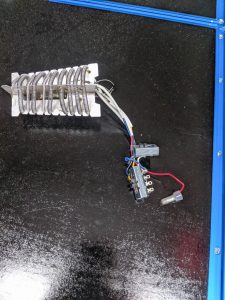 What you see here is the inside of a hair dryer, minus the motor and impeller. To the upper left is the heater coil. To the bottom are the two switches that would be in the handle. The power cord attaches to the red and black wires at the bottom. The motor itself is normally attached to where you see the small bare wires coming out of the back of the heater coil. Dryers use a 12v DC motor. The coils are connected to AC current and feeding out of them are a set of diodes that act as a bridge recifier that converts the AC to DC. What does that mean for us? It means I can throw all of the stuff you see in this picture away and we can power the blower motor with a battery of sufficient voltage (12VDC or greater). 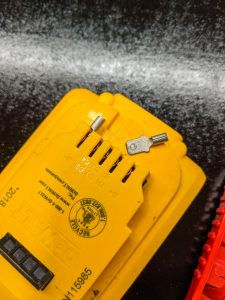 I have a lot of 20v DeWalt tools. Because of this, I have a lot of their 20v battery packs. If you look closely, you can see that the two outer-most terminals on this battery are labelled B+ and B-… or battery positive and battery negative. The other three are used for charging and tool status. Very similar to the connectors on the charger and the tools are spade connectors. As you can see, I have one inserted and it fits quite nicely. While it would work just fine to crimp some wires on these terminals and just manually insert them whenever I wanted to power up the blower, I’m sure there is a more elegant/finished looking approach. I know I have seen connectors that slide on featured on Tingaverse that you can 3D print, but I don’t have a 3D printer. But… 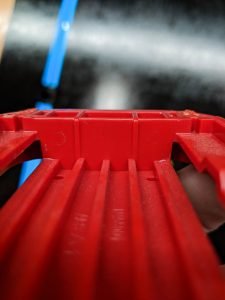 I do have several of these protective covers that shipped on my batteries from the factory. I inserted the two spade connectors into the battery and then slide the cover into place. The barrels of the connectors dug into the back of the cover marking where I would drill two holes to allow the barrels and wires to run through. It is hard to see in this photo, but if you look closely, you can see the marks. 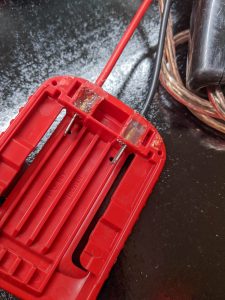 I fed the wires through the holes and crimped the connectors on. Make sure you have the polarity correct. I wanted to make sure that I used red for positive and black for negative. After I got everything positioned, I filled the cavities with high temp hot glue. To make sure that the terminals wouldn’t move while the glue set, I used a piece of ice to both flatten the surface and to chill the spade connector which helped the glue set from the inside. I then used a razor blade to trim any excess off. 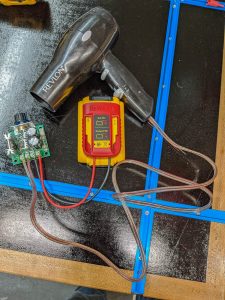 Here is everything assembled and ready to use. The DC motor controller I used cam from Amazon and was $7. Here is a link if you want to buy one for yourself. Note that the motor in my hair dryer will pull a maximum of 1.4 amps at 20vdc at full bore. I will never run it at this amount because it results in WAY too much air flow and will also likely burn up the motor. For me, the sweet spot seems to be around 40-50%. 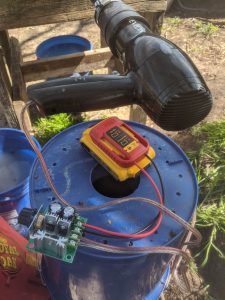 Here is another shot of the blower attached to the forge. I might decide to make an enclosure for the controller at some point, but for now I’m fine with it as it is. 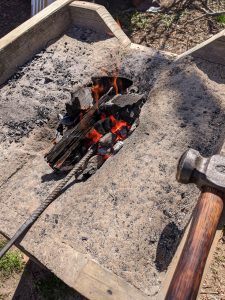 Here we are with a fire going in the forge. I’m heating up some 3/8 rebar. I shape this into a coal rake shown below that is an ideal first tool to allow for safe and easy management of the coals/fire. 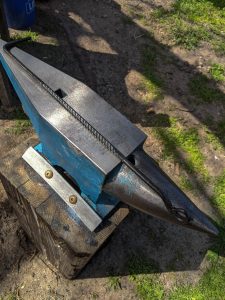 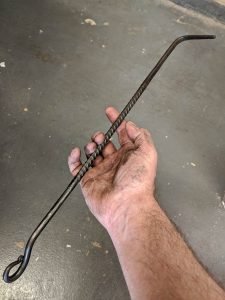 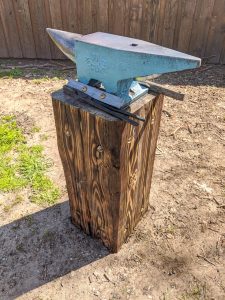